The star of the show, Gipsy Danger

Very rarely is there a movie from Hollywood that gets so much buzz and anticipation from the SCUM Cinema camp. I was pretty sceptical about this film, which was probably the real reason why I was tasked to handle the review (doh!), although the official excuse from the two monkeys was that “its only right that a mexican review a fellow mexican’s film…”

My main concern for Pacific Rim was that it could turn out to be another Transformers, which was so utterly boring and lame I slept through more than half of the show ( and I am a big fan of the original Transformers anime). So armed with a bucket of popcorns and a bundle of low expectations, I let the movie unfold before my tired eyes.

Enter the Becket brothers, Raleigh and Yancy – hotshot pilots of the jaegar, Gipsy Danger. (Jaegars are the what the giant robots are called, by the way.) Jaegars require the pilots to perform a sort of “neural mind meld” with the hardware in order to control it, so to reduce the stress, the jaegars are usually controlled by 2 pilots. At this point, let me add that we are eternally grateful to Del Toro for not opting to use a face to sell his film. I just cant imagine watching Nicholas Cage or Zach Efron as the lead actor, it would feel like watching Power Rangers instead.

So with the introduction of the jaegars, everything was under control. Yancy and Raleigh were superstars, the kaijus were becoming mere household pests, and kids even played with kaiju replica toys.  But alas, as time goes by, the kaijus were getting bigger and badder by the day, until one fateful evening, the brothers had to battle their biggest kaiju yet.

Gipsy Danger finally managed to defeat the category-4 kaiju, but not without suffering a huge loss on their end as well. Yancy Becket, the elder brother, died during the battle and Raleigh goes through a downward spiral and hides in the trenches, unable to recover from this trauma.

Fast forward 5 years later, the kaijus are turning the tide and destroying the jaegars one by one. Earth is down to only four jaegars left, with one Gipsy Danger being antiquated and requiring an old school pilot to activate it. And that is when Raleigh is invited back to the team to help.

The remainder of the film shows humanity’s struggle against the monsters, and how the heroism of a few good men can make a whole world of difference. On many counts, this movie has all the elements to make it work. It has a good mix of characters, the right number of shiny jaegars, plenty of fluorescent blooded kaijus, and enough cheesy patriotic lines that make your hair stand. (like, “Today, we are cancelling the apocalypse!” or “The end is coming, do you want to die here or do you want to die in a jaegar?”) 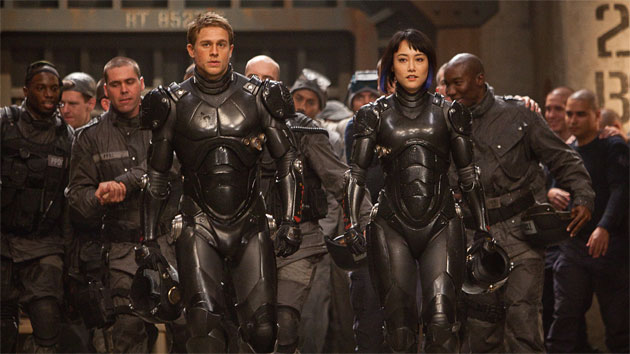 Yes, there are real humans in this film!

This is a straight-up bishy-bashy-pow-wow-kapow movie that will make all the fanboys cream their pants. Del Toro has managed to do something which other directors fail to do when they deal with a franchise / genre cinema, which is to keep the eye on the ball. He didn’t put in distracting romantic scenes or flash unneccesary flesh (think Megan Fox in Transformers), he didn’t leverage on famous faces (think Nicholas Cage in Ghozzzztrider), and he wasn’t too precious with his creations (jaegars decapitated, characters killed) However, he did fall into the Hollywood formula of adding in a stupid clown character in the form of Dr. Newton, probably just to up the comedy element for family viewing (he is annoying as hell.) The character development is a bit rushed, but if you are expecting Les Miserable then you are probably in the wrong cinema anyway.

What? Am I the only lady in this film??

If Pacific Rim was made 5 years earlier, it would probably set the benchmark for this genre in Hollywood. Unfortunately, its released on the tail of Transformers, Cloverfield, Godzilla, War of the Worlds, etc etc so its bound to be compared to those earlier films.

Nevertheless, I thoroughly enjoyed the show because its fun and the effects are absolutely amazing, but after seeing the unimpressed look on the face of my better half, I realise this could be more of a movie for the boys’ night out. So ladies be warned!